Life in America in 1815 was dirty, smelly, laborious, and uncomfortable. Only the most fastidious bathed as often as once a week. People gave themselves sponge baths in large washtubs as water had to be carried from a spring or well, bucket by bucket and then heated in a kettle on a wood stove. Some bathed but once a year, and as late as 1832,an unnamed country doctor complained that 4 out of 5 of his patients did not bathe from one year to the next. Their homemade soap was harsh, so people usually only rinsed off saving the soap for cleaning clothes which was only an occasional activity.

An outdoor privy was not something everyone had, indoor light was precious and scarce, families made their own candles from animal tallow, and they were smelly and smoky. Everybody slept in the same room near the single fireplace, several in each bed, and privacy for married couples was a luxury. 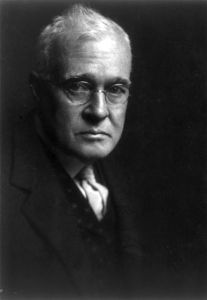 Towards the end of the Victorian age, Horace Fletcher, an American nutritionist know as “The Great Masticator”, began advocationg that people chew each bite of food until it became liquid. Presidents and generals took up “Fletcherizing” as did authors such as Henry James, Franz Kafka, Sir Arthur Conan Doyle, and hundreds of otherwise intelligent people.

Supper conversation presented a challenge. J.H. Kellogg, the inventor of corn flakes, and a follower, tried to jazz up mealtimes by hiring a quartette to sing “The Chewing Song”, an original Kellogg composition, while diners grimly toiled over their food.

It is probably a correct assumption that Fletcherites at table were not an attractive sight. It is said that Franz Kafka’s father hid behind a newspaper at dinnertime to avoid watching the writer Fletcherize.

Most of our mothers cautioned us not to gulp our food. My Great Aunt tried to lead me to chew each bite 27 times. I don’t know it that was “Fletcherizing”, but it did prevent gulping.