All our lives are made up of periods of nice and not so nice. We may as well get used to it. I went to stay with Auntie and Uncle Phil in April, 1943 for the last couple of months of school. Probably not nice for any of us.

We moved to Alameda in the summer, into the old home that was built by my Great-grandfather and now owned by Great Aunt Helen. Yes, another Aunt took us in! Let me tell you, it’s good to have a lot of Aunts.

Mr. Lloyd Sisler was the drama teacher in the high school, and also gave voice lessons on the side. In my first solo concert at his home, I stood beside the piano facing the audience, and my voice refused to escape my mouth. In spite of that, he gave me lead parts in several operettas during the next two years.

I didn’t see him again till our 40th class reunion, and he had not aged gracefully, wearing full stage make-up and a dark wig slightly askew. I introduced myself feeling sure that he would remember me as his star pupil, and talented actress.

I was shocked to find that he not only didn’t remember me, but said my voice must not have impressed him! I raised my eyebrows and said that “My mother is not going to be happy to hear that.” He roared with laughter and said I had a great sense of humor. Well, better a sense of humor than a great voice I guess. Since my mother had passed away two years before she never got a chance to appreciate the humor.

I joined the R.O.T.C, which came with a uniform and an entire Battalion of boys! It was the style to bleach your bangs, but I went whole hog and bleached my entire head one day when my mother was gone. It looked good too–better than mouse brown.

There I am in front row.

Confessions are in order at various times of our lives. We can either be perfect or lucky. I have been lucky, but also too trusting of other people. After a morning horseback ride with a group of kids, a girlfriend I learned not to trust, convinced me to borrow one of the boy’s cars and take it around the corner even though neither of us drove. She took the safer passenger side and I “drove”— right into a lamp post and a tree. I worked a long time to repay my mother for the damage, and received strong discipline from the judge.

In our small attic apartment I set up my studio and began painting very bad portraits of my friends. The space was like a small dark cave with a single light bulb, but I thought it was pretty snazzy. My first “payment” was a glass bell which lost its clapper when I took it out of the box. 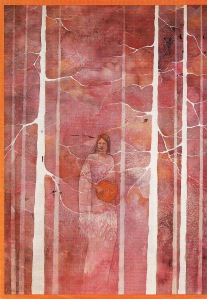 “Shadows of Our Ancestors” watercolor painting by kayti sweetland rasmussen ( This painting was done many years later.)

I needed money so I went door to door again, and boldly lied to the manager of the J.C. Penney store that I had worked for Penney’s in Grants Pass. He took me on to fold men’s jeans, but when the window dresser quit shortly after I took over his job, eventually doing the advertising layouts for the newspapers. At 17 I imagine I was the youngest art director in Penney’s history. However, I don’t advise lying to anybody, it’s not nice and it can get you into a whole lot of trouble.

There were few place that teenagers could congregate safely. The war was on, and though there was a local U.S.O. where girls could go and dance with young servicemen, the creamery closed early and except for private parties, that left the Alameda Theater. Several of us found an empty building and after much effort in raising money for rent and donations of recreation equipment and record players, we opened the Alameda Teen Center. It was a moderate success at least as long as I was there.

None of my girlfriends had their own car, however, we were permitted to drive our parents car on occasion if we replaced the gasoline we used. At eighteen cents a gallon, we pooled our money to take us to and from Oakland and San Francisco. We mostly walked our way around the island of Alameda. My mother taught me to drive on Otis Drive which was locally known as Lover’s Lane. When without a date, we spent Friday and Saturday evening patrolling to see whose windows were steamed up.

At Christmas, 1943 my mother and I drove to Torrance to be with my Grandmother. While there she became ill and we stayed for two months. At the end of the semester, having missed two months of school, I received an F on my report card in history. It was the first time I had ever failed in anything.

I went to summer school for a number of weeks with the same teacher who had flunked me: Miss Hook. Now let me tell you about Miss Hook. There is a word for people who resemble their names and Miss Hook exemplified it. Tall, skinny, drab, pointed features, buck teeth, and smug. As she handed me my report card with an “A” on it, she said ‘You see what you can do when you don’t worry about boys?” I never told her the reason I had missed so much school. There was a lot of “naughty” and “nice” in that year of high school.