Her life changed in a terrifying moment of rising water, shouting and the screaming of frightened horses. It had rained for days, and the river had finally taken enough and took the easy path over its banks, through fields and flooding all nearby ranches and homes. The extended flatlands of the Sacramento river were awash in dirty roaring floodwaters.

A few miles south, we had our share of the wet stuff along with winds which rattled the windows and took down a few branches, but nothing we couldn’t live with. Penny, our independent small dachshund who hated wet weather, took the opportunity to snuggle up in front of the warm fire.

The ominous ringing of a phone in the middle of the night seems to signify trouble, and my grandson’s voice was a confirmation. I heard him yell something about a dog, but there was so much background noise I really couldn’t tell much.

We finally determined that a nearby large ranch was afloat and neighbors were coming to rescue a great number of horses. The owner had had a heart attack and had been taken away by paramedics. Two or three dogs had been placed in cages for safety, and we were being asked to take one of the dogs.

I shook my head and said “No way!” and we left it at that for the night.

As our pickup pulled into our grandson’s rented farmyard in Tracy, California, we were greeted by vocal histrionics from his two dogs, and as if by common consent, coming majestically down the back steps, was the “Nana” dog of Peter Pan fame. Without hesitation, neither acknowledging our presence nor the barking dogs, this large fuzzy creature leaped into the open door of the pickup and settled herself in for the duration.

Hurt and lost dogs and people turn as if by instinct to a refuge. Do they sense warmth and food and a friendly voice?

Her name was Panda, though she looked like a Nellie, and I wanted to rename her, but being outvoted, Panda it stayed. Dr. A assured me that Grandma Nellie who had not liked dogs, would not enjoy having one using her name. I imagine as a small puppy she resembled a fluffy, soft grey and white panda bear.

She was nervous when she arrived home, and we forgave her bladder’s loss of control when she hung her head and looked sheepishly at us cleaning up the mess. Otherwise from the first she was a courteous and well-mannered guest who obviously sensed that the furniture did not have her name on it. She knew instinctively which rooms were off-limits.

The relationship between dog and household is a subtle thing. Her previous owner had in the meantime passed away, and there was no reason we could not include her in our household. Penny had merely glanced at her and decided she was OK, so with a minimum of fuss she became our second dog. Size-wise they resembled Mutt and Jeff.

After a run-in with an angry goose Penny had long ago determined that going for long walks was not her cup of tea, but Panda welcomed the exercise and Dr. A welcomed the company of this curious friendly companion. Daily they took off down the Alameda Creek Trail while Panda paid no attention to the large number of other romp and runners. When Dr. A stopped to pass the time of day Panda lay down and patiently waited it out, sometimes taking the opportunity to grab a nap. 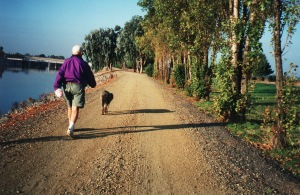 Alone one morning, I got a phone call from a young boy who said he had found Panda wandering by herself on the Trail, while using it himself on his way to school. Fearful that something untoward had happened, I asked if he could take her to the nearby Niles Cafe coffee shop to wait 15 minutes or so for me. When I arrived at the coffee shop, no dog or husband were there, but several friends jumped up to help me find the missing couple. I appreciated the concern of people like the Corrie’s who owned a local gift shop in town.

As we started down the street, Dr. A passed by in the car with a very happy and smiling Panda in the back seat. As he had started on his way home, he had not gone far when he he realized that he was missing a passenger. Strange to say, he had forgotten her!

During one of his long conversations, he had stopped to help a friend get her Lab out of one of the ponds along the way, and Panda, instead of waiting, had had enough and decided to come home alone.

Just as she had chosen the front seat of the pickup as her right, she chose her place in the house under a table in our family room. Disconcerting to some perhaps, unless they were a dog lover, to find this large furry animal lying so close to their feet under the table. She frequently offered her warm tongue as a friendly welcome. During the long years she graced us with her presence, she rarely barked, and exhibited all the kind attributes of the Peter Pan “Nana”.

We had learned that Panda was a year old when she came to us, and when she was eleven, she began showing signs of slowing down. Larger breed dogs, including Old English Sheepdogs, don’t usually live as long as their smaller cousins. It was apparent that the long walks which frequently ended in joyous rabbit chases down by the Bay had taken their toll. Though her hearing and eyesight were apparently as good as ever, we realized that like so many older humans, her mind was not as quick as it had been.

On her last day. as we slowly walked to the vet, she turned and looking at Dr. A, gave one woof. Was it a goodbye to her friend, or perhaps a thank you for the rescue so long ago, and all the good years since? It had been a good life.