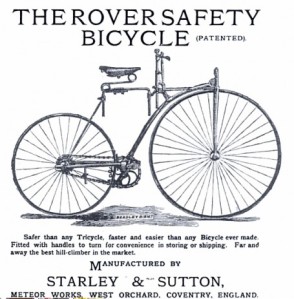 In the late 1800s, the newly invented safety bicycle became all the rage across America. Some people thought they were morally hazardous.

By 1892 Wilbur and Orville Wright had taken up bicycling and had recently taken a long trip down south. They went down the Cincinnati Pike, stopped at the County Fair, and pumped around the track a few times. They continued on to Miamisburg, went up and over numerous steep hills and stopped to see the prehistoric Adena Miamisburg Mound, the largest of Ohio’s famous conical shaped reminders of a vanished Native American civilization. In all they covered thirty-one miles. Astonishing!

Bicycles had become the sensation of the time. Everybody rode a bicycle. These were the newest version with two wheels the same size unlike the ones from the 1870’s and 80’s which tended to tip the rider over. These bicycles were a ‘thing of beauty, good for the spirits, good for health and vitality, and generally improved one’s whole outlook on life. Doctors enthusiastically approved.

One Philadelphia physician wrote in the American Journal of Obstetrics and Diseases of Women and Children, that from his observation there was no better physical exercise for both men and women. The bicycle was one of the greatest inventions of the nineteenth century.

However opposing voices were raised in protest. Bicycles were proclaimed to be morally hazardous. Until now children were unable to stray far from home on foot, but on a bicycle, in fifteen minutes they could be miles away. Plus young people were not spending enough time at their studies, and more seriously, that suburban and country tours on bicycles were not ‘infrequently accompanied by seduction.’ Canoodling was taking place in every clump of bushes at the side of the road! Outrageous!

Fortunately such concerns had little effect. Everybody was riding bicycles; men, women of all ages and from all walks of life. Bicycling clubs sprouted up all over the country. In the spring of 1893 Wilbur and Orville Wright opened their own small bicycle business, selling and repairing bicycles, only a short walk from their home. They named the enterprise the Wright Cycle Company.

It was their work on bicycles and all manner of machinery which showed Wilbur and Orville Wright, inventors and aviation pioneers, that an unstable vehicle like an airplane could be controlled and balanced with practice.

The only other word we heard about the hazards of bicycle riding, was the wedding of “Daisy”, after she hopped on the seat of the bicycle built for two.

10 thoughts on “DO BICYCLES LEAD TO SEDUCTION?”