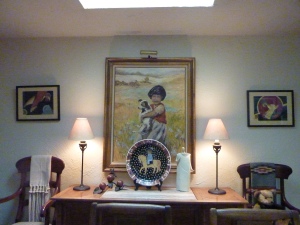 Sitting here in my breakfast room, savoring a second cuppa, Charlie is impatiently waiting for the morning walk. He’s always in it for himself, the tail wag and lopsided grin are a red herring covering up his real opinion of us. The mornings are so cold we use the excuse that it will chill his feet if he goes out before the sun warms the road. I have spent the past few days getting into the 2015 mindset, like most other people; putting away the Christmas finery, and putting the house back into its normal condition. 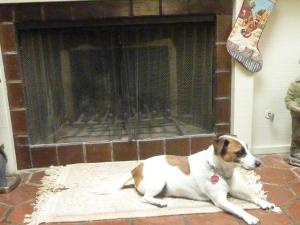 The holidays were great, with family arriving for a Danish Christmas feast on the 22nd. I had made several Danish dishes, such as frikadeller, a meal patty, a ton of cookies, and a number of side dishes. The decorations went low-key this year, suitable for a country-style celebration. Santa and his sleigh ran down the center of the long table, with an army of nutcrackers at his rear, and a hand carved farm scene on the buffet.

Unfortunately, I awoke that morning with an ugly eye infection which took us to the ER. I have become quite friendly with the staff there, as 2014 took me there to celebrate my birthday. They even wrote “Happy Birthday” on the large schedule board in the room to make me feel at home. You can’t ask for more. But this eye infection was so bad the resident ER doctor sent me to the ophthalmologist in the afternoon, just as the party was to begin. Fortunately our two daughters are expert party-givers, so they took over while we were gone. Now that’s the way to give a party!

I gave Dr. Advice an iPad for Christmas, even though he is not computer literate (yet). The battery function seemed slow so we took it to the Apple store, which is a most interesting operation. First of all, if the product is so wonderful, why are there so many people waiting in line for hours to get them fixed? You obtain an appointment online, but when you arrive, there are great numbers of people seemingly with the same appointment.

Once fixed, I was asked to put in his ID and password, which was a good idea, except I forgot to bring the paper I wrote it on. After spending 3 hours to get that far, we left and went out for lunch.

I never make New Year’s Resolutions because I would break them by January 2nd, but to those who do make them, good luck. We all need a certain amount of introspection if only to make us try harder.

The weather has warmed, my coffee has cooled, and Charlie is still doing his Jack Russell best to go for his walk. See you later.