Dogs have many ways to get your attention .  l. When asleep.  2.When awake.  3.  By shaking, sneezing, or low growls.  4.  Sitting quietly and staring with a sweet and forgiving look on their face.  In other words, dogs are part of the civilized world’s most efficient con artists.

They have built-in clocks which if an action  has taken place at a certain time one day, it must be continued on the next, ad infinitum.

One of the best at this is the Jack Russell Terrier.  It is a given that they know what is best for them and for you, and once their minds are made up, there is no going back.  In return for all this, they are one of the most delightful and entertaining of little dogs. 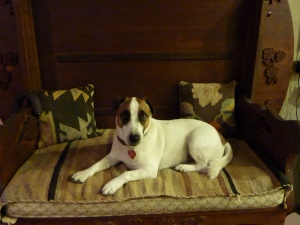 Charlie took over this household a bit more than five years ago, and after frequent discussions and disagreements, he has taken his proper place in the hierarchy, which is somewhat left of center.  He is a bright light in whatever locale he finds himself and has never met a stranger.

Through the years there have been many dogs, each an individual challenge.

Max the Doberman had to vie for attention from Liza the German Shepherd, the resident perfect dog, so the bar was already pretty high.  It took about two years for Max to become a good citizen.   He spent many days lying beside Dr. Advice’s chair in the office emitting noxious odors as only a Doberman can, but he was a lovely and loyal friend and an energetic running companion each morning to me.

I’ve written about Liza before, and at each telling, she becomes more of a paragon of canine virtue. 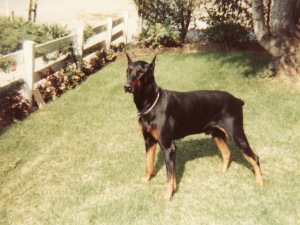 There were several serious little dachshunds, and once a chihuahua, who traveled everywhere with us, and they were each happy little campers, cheerfully crawling into a sleeping bag or a boat wherever we went.

I have always loved Old English Sheep dogs since I first saw Peter Pan with the Nana nurse dog, but I told my grandson when he ended up with Panda that I could not take another dog.  But when we drove up to the ranch one afternoon, and this amazing Nana dog came tripping down the porch steps and leaped into our truck., all bets were off!      A dog is that wonderful happy roll-around thing that can be a life enhancer, and I could never be without one.  A dog is not interested in politics, religion or the local news.  They are willing to sit quietly and commiserate when we are feeling poorly.  Show me a person who can equal this quality and I’ll marry him!