If I can ever pass along any words of wisdom to you, they will be: don’t try to mess with your family’s Christmas traditions.

Our first Christmas in our new house if you will remember, was spent holding our new baby girl after drinking Moscow Mules while listening to “Sam’s Song on the record player.

The Rasmussen Family Christmas Breakfast at my mother-in-law’s house was compulsory, but I wanted to do it myself at our new house. Getting past that hurdle meant choosing an impressive menu with a few awe-inspiring decorations thrown in. There is nothing more determined than a young inexperienced married woman trying to register her footprint.

As I was growing up, on Christmas we were often in some other city or state, in temporary lodgings, or part of a larger group of personnel on a Navy base. At Grandma’s on Christmas, I was more interested in grabbing whatever present had my name on it lying under the tree than paying attention to what she had made for breakfast.

In spite of her feelings of disinterest in my dear little Grandpa Jim, he was always invited, though directed to sit at the far end of the table. I was always told that Santa brought the tree on Christmas Eve. My own opinion is that we probably couldn’t afford it before then. Nevertheless, it was beautiful as all Christmas trees of whatever shape are, even if you aren’t a believer in the reason for having one. (I have lots of Jewish friends who just like the looks of them. One family kept one in a playpen so they could whisk it out of the room when their mother-in-law dropped in.)

The tree, fully decorated, stood in our living room in Long Beach, behind the sliding doors of the dining room. We usually had one roomer, Harry Hance, so Grandma’s crowded left-over bedroom was off the living room. I was never allowed in it before Christmas because it was the place where all the Christmas decorations were being prepared. So on the great day, probably at the crack of dawn, the doors slid open, the radio played a Christmas song, and we all piled in destroy the carefully wrapped gifts. 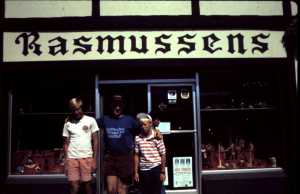 In the Rasmussen family, the Danish tradition prevailed, and one present was allowed to be opened on Christmas Eve, depleting the disgustingly overwhelming pile of gifts not at all. I thought I had died and gone to heaven.

On Christmas morning, breakfast reigned supreme, with the bestowal of gaily wrapped packages following. My mother-in-law was nothing if not energetic, and somehow the Rasmussen Christmas Breakfast was loaded onto the dining room table.

Platters appeared filled with halves of broiled, sectioned grapefruit topped with brown sugar and a cherry, other platters contained ham, bacon, and sausage; accompanied by another platter heaped with hash-browned potatoes. Silky scrambled eggs glowed brightly on another platter, while hot biscuits rested in a basket. A large pitcher held hot country milk gravy for the biscuits, though it was a shame to cover them up because my mother-in-law was a superior biscuit maker. All they needed was the home-made preserves and butter sitting amongst all those platters.

The amazing thing was that we could drag ourselves away from the table to attack the tree, but we did, only after the dishes were washed and put away for the big dinner to follow in the afternoon. Amazingly, these were all skinny people.

The year that I chose to make my mark, I had studied cookbooks, newspapers and magazines, and came up with what I thought would knock their socks off. I had made our own Christmas cards, the house was decorated and filled with good cheer, and I began bringing platters out to the table. 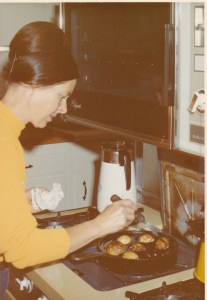 I don’t really remember what it was I made that year, perhaps something containing chicken livers or creamed something or other. I’m sure it looked beautiful, and I’m just as sure it tasted good, but the entire table, including my lovely husband, turned their collective noses skyward. It wasn’t the Rasmussen Christmas Breakfast.

I’m nothing if not willing to take advice, and I don’t need a Christmas tree to fall on my head. I got their message, and thereafter, a replica of the Rasmussen Christmas Breakfast appeared on my table. 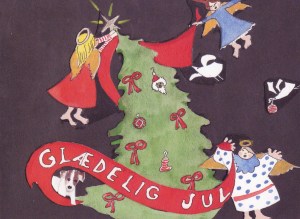