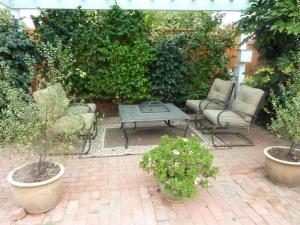 I took my second cuppa out to this little corner of my back yard this morning, recipe folder in hand trying to think of something for dinner. This recipe for “BEER CHEESE SOUP—COBURG INN” fell out, making me wonder where I had originally found it at least 45 years ago. I made it often in the cold, rainy days in Seattle, Washington, along with good solid rustic bread and a crisp green salad, but it has remained hidden in the mess of clippings and scribbled notes till it hit the ground today.

Coming in to my computer, I Googled “Coburg Inn, and found that the recipe came from the Coburg Inn in Coburg, Oregon near Eugene, in 1877. But the really exciting thing for me is that a good friend of ours is from Coburg, Germany. I don’t think he knows about beer Cheese Soup, but I will make it for him. He is more of a sausage and kraut man, but I think he will like this one. It’s rather touching to see place names given to remind people of former homes. Of course we see that all over the States since everyone has come from somewhere else.

Coburg, Germany has an impressive history as the birthplace of Prince Albert of Saxe-Coburg and Gotha, who married Queen Victoria of England. (It is not known if they ever ate Beer Cheese soup.)

Our friend Bill and his twin brother were twelve years old when the war ended, and the Americans marched through town. They were enthralled with the chocolate bars and conviviality of the American soldiers, and at the age of twenty they sailed for the “New World” with twenty hard earned dollars between them. For many years they made an annual migration back to Germany for the Octoberfest celebration in Munich, and of course, a trip down memory lane to Coburg. 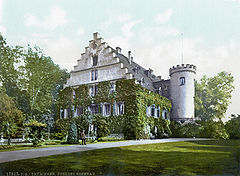 This recipe for JALAPENO CORN BREAD fell would go well with the soup.

Mix it all together
Melt 1 Tbs butter in each of 2 cast-iron or some other heavy baking pans. Divide the batter between. Bake for about 45 min Serves 10