In each community there is, or should be, a tiny place where people can congregate and share ideas. Europe abounds with small hidden away places, possibly where artists and writers have scribbled away in the dim romantic past. Ideally it should be old, and carry a history of questionable legality. The coffee should be hot and strong, and should be accompanied by something good to eat. 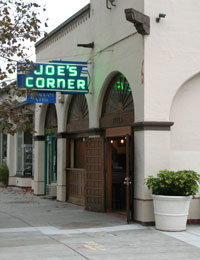 I don’t know who “Joe” was, but he probably laid claim to this corner in the early part of the 20th century of prohibition fame. Our friends own the property, and Joe may have been an early relative. The little shop remained vacant for 50 years or so of my memory, while people said that “someone” should put it back in business.

A charming lady named Melissa has now put it back in business, purveying soups, salads, and sandwiches, and coffee strong enough to keep you awake for half the night. We met friends there yesterday, and after imagining the days of Prohibition, when naughty people may have surreptitiously slipped into the back room to quickly wet their whistles, we added Joe’s Corner to our morning itinerary.

THOUGHT FOR THE DAY:
“If it is so that we live only a small part of our life–what happens to the rest of it?” Amadeo Prado

“What is this place?” I enquired poking my head through the old screen door of a small shop on a side street in Niles, California early one morning. Though we had passed this shop numerous times, I had never given it much thought. My first thought was that it might have been a bar, or even a head shop! Either way I thought I had better check it out before going in at 8:30 in the morning. An intriguing trim on top of the doorway showed a small painting of sign language, and no name otherwise. Wooden men’s neckties gaily painted hung down on either side of the doorway. No indication of what was going on inside.

“It’s a coffee shop” called out the bearded and smiling young fellow behind the bar, “come on in!” Having watched my trepidation in peering through his doorway he looked near to laughing at me, and was plainly telling me that they wouldn’t bite me! The shop was filled with an assortment of happy people who smiled and joined in the invitation, and the entire establishment was reminiscent of the coffee shops of Berkeley in the ’70’s, which happened to have been my favorite decade. What a startling difference from the local Starbuck’s or Peet’s coffee shops. “We’ll be back tomorrow!” I told him, running back across the street to tell Dr. Advice where we could go for coffee the next morning.

And this began not only our favorite apre-walk destination for the next ten years, but the forging of many treasured friendships.

Charlie Chaplin came to Niles in 1914, and some of his finest films were made here in those early years. A film museum in town celebrates those exciting days when Bronco Billy and Charlie Chaplin ruled Niles. The early silent films draw many tourists and visitors to the little town along with the many antique shops along the Main Street. The railroad which runs alongside at the base of the rolling hills was transportation from San Francisco then as now. A small railroad runs between Niles and the tiny town of Sunol through the Niles Canyon. It was a ripe place for a Berkeley-style coffee shop when Dirk came to town. A Cal Berkeley graduate, he and Camille and their daughter Zoe, became well-loved householders. The California School for the Deaf and Blind had recently relocated from Berkeley to Fremont, which was a great school for Zoe, who is hearing impaired.

Just inside the front door, and covering an entire wall of the high-ceilinged 19th century building, is a brilliant painting with Egyptian ladies in their typical sideways pose. On an opposite wall, is another wall-sized painting of an Egyptian chariot race. These paintings, and everything else covering the mismatched walls and part of the ceiling, were painted by Camille, a talented artist. Her brush was an extension of her brain, and what appealed to her at any given moment, was translated into bright colors on the walls of this tiny place. The feeling imparted to the shop’s decor, and the happy sensory response of the customers, was altogether appealing.

The clientele of this remarkable place has always been comprised of local residents and business people. Artists, musicians, techies, writers, shop owners, philosophers, teachers and lowly people like Dr. Advice and I who were made to feel welcome.

A young songwriter with great wit, and who has a song in the Baseball Hall of Fame, sat now and then playing a game of dominoes in the morning. There were No Computers in sight as there are today in some of the other large coffee shops.

Ideas flew around the room like Harry Potter’s broomstick, and made for lively conversation. Everyone knew one another, and each morning was a house party atmosphere. Almost everyone knew how to make the coffee, which was all that was served, and even I took an occasional turn at the espresso machine.

There was no food served, but occasionally someone would bring a platter of cookies or pastry to share. One of the young women who was a baker, and who has since opened her own pie company, brought pastry, which was so good people looked forward to it. It was some of the best pastry I ever tasted.

A few people who were regulars, even had their names painted on the backs of their favorite chair, and lots of friendly rivalry took place if anyone should mistakenly sit in the “wrong” chair.

There were occasional evening parties, when the shop was closed to the public, with music, singing, and always great party atmosphere. Some of the memorable jollifications were a crab feed, a chocolate cake competition, A French-themed party, karaoke, and general merriment.

If I have given this atmosphere the sense of excitement and general friendship and caring, I have succeeded. During the downturn of the tech business, in which some people were employed, and then not, everyone lent a supportive shoulder to cry on. On the morning of 9-11 tears and a quietness settled on the group. Someone had brought a small TV, and we sat spell bound not believing our eyes. Not a lot of coffee was consumed that morning in the silence. It was as if we shared the profound grief our entire country was feeling.

Our lovely Old English Sheepdog Panda, who sauntered along with us each morning with her slow observing pace, stopping to greet everyone whom her parents greeted, was known and loved by everyone. One morning I did not go on our walk and sometime after they left, I received a phone call from a boy asking if I had a big dog named Panda. Assuring him that I did, he told me he had found her walking alone on the trail while on his way to school.

Frantic, I asked if he knew where the Nile Coffee Shop was and if he could take her there and tell someone she was lost, I would be there as soon as I could. I had no idea if Dr. Advice had been abducted, fallen in the creek, or was otherwise in distress.

I ran into the coffee shop, and immediately 4-5 people jumped up and said they would help find her. Two were shop keepers, and I was so grateful to them for delaying their trip to open their own shop. As we got out to the street, there was Dr. Advice driving past unconcerned and with a large furry head sticking out the rear window, ears blowing, tongue out and a smile on her face

I should explain that my husband has who has “never met a stranger”, would talk to a tree if it would answer, and absolutely loves people and dogs. He had begun walking with a young woman friend and her Labs, and engrossed in the conversation, simply walked off the trail and into the park without sleepy old Panda. On his way home, he realized he was missing a passenger and went back to collect her from the boy who was bringing to the Nile.

Generation Two of the Nile Café after Dirk sold it, will be another post, after Han came with her delicious cooking and her delightful family. The fun times still persist, with the addition of new interesting people who have joined the group.

As an artist, I am a people watcher.  I may not remember your name, but I will always remember your face.  I remember a woman I never met who was sitting on the  front steps of an apartment building ten years ago.  She was a black woman wearing a bright dashiki and a colorful scarf around her head.  I longed to paint her, but I was caught in  traffic, and late for an appointment.  Her expression while watching the traffic going by her apartment building was sad, and I imagined various  reasons for her pensive gaze.

There are numerous faces which often flit through my mind.  I watch and mentally sketch the contours of their faces and bodies, or draw them in air or on the tale with a finger.  Sometimes  I form the images of faces in the patterns which pop up in carpets or even floors.  Crazy.  Even crazier is when I try to find them again the next day, and they have gone.

This morning in Starbuck’s while waiting in line for morning coffee, I studied the people around me.  There was the man from Lebanon who learns English by working the crossword puzzles.  He is there whenever we go in.  A row of people working on their Apple computers were lined up against one wall.   A table of three 10-11 year old girls were giggling away with their large sized whipped cream fancies.  Mean-spirited as I am and as a former teacher, I wondered why they weren’t in school!  (And as a frugal mother, I wondered where they got all that money!)

There were the old couple in the corner on the soft chairs reading the New York Times.  And just where did all these very tall, very thin and knock out beautiful girls in tight designer jeans and  boots with skyscraper heels come from?  Busy people, rushing to get to work, flash in and out with their mid-morning caffeine fix,  while a couple,  obviously not married, were chatting it up.  He, perhaps in a mid-life crisis, leaning too hopefully toward her while she, half his age,was looking a bit doubtful about the whole thing.

A microcosm of coffee shop life, repeating itself daily, and always fascinating to a people watcher.  Where do they go, what is their job, what are their problems, what is their life?

Then suddenly, it was my turn at the counter and the barista knows well what my order will be:  a vente caramel latte, whole milk, extra whipped cream and extra caramel on top.    Oh, and a tall coffee for Dr. Advice.