The final goodbye always comes as an unpleasant gut-wrenching surprise no matter how long its approach. I knew that at my father’s passing the mournful sound of “Taps” would echo over the hills of Southern Oregon. What better place to say goodbye to this son of the Rogue River, surrounded by his long-gone family, and sheltered by lichen-covered maple trees with leaves just tinged with the blotchy blood red of imminent goodbye.

Though expected, the intrusion of the bugler and two other Navy personnel, snapped me out of memories of this strong and proud man. He was an Oregon country boy, but he was Navy through and through. Therefore, we were also Navy, moving as we were sent and staying at their pleasure. It was his life, and the love of the sea never left him.

As the bugler raised his instrument to his lips, I wondered where this familiar twenty-four note melody came from. It signals soldiers to prepare for the day’s final roll call. In use since 1835 it was known as “Scott’s Tatoo” and named for army chief Winfield Scott.

The tune was a said to be a revision of a French bugle signal called tatoo, which notified soldiers to cease their evening drinking and return to their barracks. The word was an alteration of “tapto” which was derived from Dutch “tap-toe” or to shut the tap of a keg.

In the Civil War Brigadier General Daniel Butterfield thought the sound of the tatoo was too harsh, so he ordered his 23 year old bugler to polish it up and make it softer and more melodious. It is also known as Butterfield’s Lullaby.

The echo of the last note hung in the air, the sound of a volley of shots rang out over the valley, and roll call was over.

“Under the wide and starry sky
Dig the grave and let me lie.
Glad did I live and gladly die
And I laid me down with a will.

Across the mountains of Southern Oregon flows a mighty errant river in a great hurry to blend its waters with those of the Pacific Ocean. Early French visitors called it Coquins (rogues) describing the local Indians. It could also have been called that for its wild changes of behavior between hairpin bends and boiling rapids before suddenly flattening out into sleepy pristine waters where native fish shelter beneath overhanging trees.

This was the Rogue River of my father’s youth, where he developed his love of the outdoors, nature and fishing. My grandfather raised cattle outside of town and was the only butcher in Grants Pass. They say he was a master sausage maker.

My Sweetland Grandparents, Walter and Tena, raised six children, my father coming in towards the end. He was a trickster and a tease who wasted a lot of school time trying to prove the teacher wrong. He was smart, and a smart alec. He was excellent at solving math problems but a lousy teacher. He had no patience for stupidity, so I stopped doing math in the 4th grade. 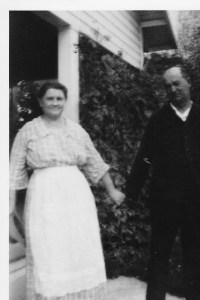 Each of us in our family have our memories of the Rogue. One of my daughters shudders remembering being caught in a rapid between the rocks, so the Rogue was not a happy river for her. Much later I tried my initial foray into water-skiing on the Rogue. Having risen to the occasion on a single ski, I chose never to do it again. Probably none of us felt the magnetizing pull of the River as my father did after the War. The clarion call of home had been ringing in his heart for too many years.

Arriving in Grants Pass, I was a stranger to cousins I had never known, and family history better left between the pages of history. Dad’s sister Ardith had two boys I liked; the youngest, Bud, a wild kid who loved to jump off the bridge at the park in Grants Pass, grew up to be a railroad engineer, and his brother Walter who became a worm farmer.

Aunt Hazel’s brother Uncle Charlie owned the pool hall in town where we went for ice cream, committed suicide one morning before work. I don’t recall with perfect clarity whether that was before or after we found out his daughter Doris was a prostitute.

All of these things were debated with great interest with Aunt Hazel’s dog Bounce, whom she swore could talk. Sitting out in the sheep barn with him we discussed Life’s great imponderables. Bounce was well known for carrying a basket of gladiolus at the head of the annual Caveman Parade.

Once a week, sitting in a fire lookout on top of the mountain as enemy plane spotters, my girlfriend and I were enveloped in blue smoke as we puffed ill-gotten cigarettes, happily ignorant of health issues, our only fear of future consequences coming from our parents.

I was hired at the local soda fountain at fifteen, after assuring the owner I was sixteen and would bring proof soon. My new boss had at one time been a serious suitor of my Dad’s older sister, Aunt Arline. Though he asked again for my work permit, he did not pressure me and I was allowed keep scooping ice cream and making the skimpy tuna sandwiches he required. On good days I was permitted to help make the ice cream with another High School student, a boy who became another casualty of the War in another year.

The new sensation of being recognized because of my name in this town, gave rise to an unfamiliar sense of belonging. I began to understand the meaning of “home”.

The reassuring warmth and smell of freshly baked bread greeted me upon my arrival home after the hurricane in 1938. Since that time, I equate that pleasant smell with home.

We toured the eastern seaboard from Maine south to the Carolinas numerous times during our tour of duty. The first weekend we visited my mother’s birthplace of Woodsville, New Hampshire also introduced us to the Lake Morey country club/resort in Fairlee, Vermont where my aunt Corinne was born. The two towns seemed to be separated by just a cow-path, but that may be my faulty memory.

The resort was first built by my great-grandfather George Kendall and cleverly named The Kaulin. From the beginning it had golf course, tennis courts and country club amenities showing great foresight in a country gentleman.

“Gone With The Wind” was being shown in Hartford, and we treated ourselves to new clothes. Mine was a pink wool coat and the ubiquitous hat with streamers, this time a pink one. Yet again it shows my absolute shallowness to remember what I wore instead of Scarlet O’Hara’s plight. 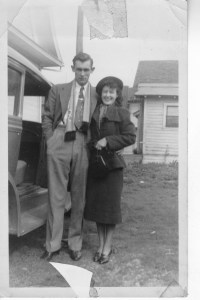 My Dad was studying hard these days, bringing home piles of books, and we often studied together. Since he was often annoyed by my complete brain vacancy in math, I began reading some of his papers hoping to impress him with my memorizing skills. As we sat down I brightly asked “What is the definition of a limberhole?” Without giving him time to answer I replied “A hole in the bulkhead of the doublebottom which facilitates the flow of water and lightens the weight of the metal.” I had the answer in case he ever needed it.

The diving gear in those days consisted of Men from Mars suits, with a large round helmet bolted to it. In his training, my father was dressed in this heavy confining outfit and lowered into the tall narrow tower on the Thames River, working at whatever skill he was perfecting.

“On the morning of May 23, 1939, the submarine USS Squalus slipped beneath the storm-tossed surface of the Atlantic on a sea trial. Minutes into the maneuver, she began flooding uncontrollably. The boat sank to the ocean floor nine miles off the New Hampshire coast, trapping 59 men on board.”

For some of the crew this date would be carved on their headstones. For others it would mark a 39 hour ordeal they would live with the rest of their lives. And for a hastily-assembled Navy rescue team rushed to New Hampshire, it would be remembered as the date they launched an unprecedented rescue mission that stretched their abilities.

No submarine rescue had ever taken place below twenty feet of water–the Squalus was 240 feet down resting on the bottom. The rescue methods had only existed in theory before this time.

In the end, there would be four Medals of Honor, 46 Navy Crosses and one Distinguished Service medal awarded to officers and men of the submarine rescue and salvage team. There would be a glorious new chapter written in the history of underwater rescue.

My father was part of this rescue mission, with a change of rank and uniform, and a new appreciation of the unforgiving power of the sea for those who choose to challenge her depths.