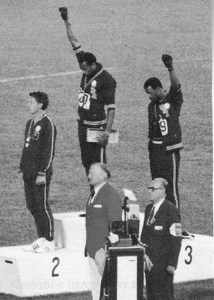 The 1968 Summer Olympics were an international multi-sport event held in Mexico City, Mexico, in October 1968.

They were special on two counts; they were the first to be held in Latin America and the first in a Spanish-speaking country. Previously the Games had been held in First World countries. They were also the first to use an all-weather (hard) track for track and field events instead of a cinder track.

Three months after Robert Kennedy’s killing the real world again insinuated itself into sports. Ten days before the Games were to begin, nearly ten thousand people gathered to protest the nation’s expenditures on games when millions of Mexicans lived in poverty. Gunfire from police and soldiers killed more than two hundred protesters.

The 1968 torch relay recreated the route taken by Christopher Columbus to the New World, journeying from Greece through Italy and Spain to San Salvador Island, Bahamas, and then on to Mexico. American sculptor James Metcalf, an expatriate in Mexico, won the commission to forge the Olympic torch for the Summer games.

Though born in New York, Metcalf was an expat for most of his life, living first in London, Paris and finally settling in Mexico where he opened a studio and forge and taught students.

On the morning of 16 October, 1968, US athlete Tommie Smith won the 200 meter race with a world record time of 19.83 seconds. Australia’s Peter Norman finished second with a time of 20.06 seconds, and the US’s John Carlos won third place with a time of 29.10 seconds. After the race was completed, the three went to the podium for their medals to be presented. The two US athletes received their medals shoeless, but wearing black socks, to represent black poverty. Smith wore a black scarf around his neck to represent black pride, Carlos had his track suit top unzipped to show solidarity with all blue collar workers in the US and wore a necklace of beads which he described were for those individuals that were lynched, or killed and that no one said a prayer for, that were hung and tarred. It was for those thrown off the side of the boats in the middle passage. All three athletes wore Olympic Project for Human Rights badges after Norman, a critic of Australia’s White Australia Policy, expressed empathy with their ideals.

Both US athletes intended on bringing black gloves to the event, but Carlos forgot his, leaving them in the Olympic Village. Norman suggested than Carlos put Smith’s left hand glove on his hand instead.
During the playing of the Star Spangled Banner both athletes bowed their heads. As they left the podium, they were booed by the crowd.

Smith later said , “If I win, I am American, not a black American. But if I did something bad, then they would say I am a Negro. We are black, and we are proud of being black. Black America will understand what we did tonight.”