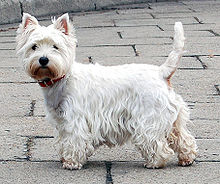 He quietly moved into our neighborhood on the end of a leash which was attached to the hand of a nice-looking young woman. Charlie was enchanted as he struggled at the end of his own leash held by Dr. Advice. Introductions were in order for us and for the dogs. “What’s his name,” I asked. “Charlie”, his owner answered. I assured her that it couldn’t be possible, since the dancing bundle of energy on our leash was the real Charlie! Henceforth, this charming ball of snow white fur would be known as “Charlie 2”, and our joyous companion was “Charlie 1”.

Like some people, Charlie 2 developed some health problems which prevented him from enjoying his daily walks, so he “walked” in the arms of his owners. Not nearly as much fun as on his own 4 feet.

He was the very first dog the new neighbors had adopted, and was beloved as an additional child. After struggling for several years with ill health, Charlie 2 left as quietly as he arrived, leaving his human parents bereft.

I wanted to tell my neighbor to get a new dog right away, but I knew it was too soon. I remembered sitting in my car years ago in front of the vet’s, with tears streaming down my face when my precious Liza took her last sleep. A concerned woman leaned into the window of my car and told me to “get a new dog”. I’m sorry to say I rejected her well-intention suggestion by blurting out that “I already HAD” another dog and it isn’t the same. Our doberman Max, waited at home for his companion who would never come, while we adjusted to the unfamiliar life of caring for only one dog.

Each dog or cat as well have their own personality, and we humans are privileged to share it for an allotted time. At present I’m grateful to share the wild and happy personality of Charlie 1, who arrived after quiet and sublime Panda, and I wish the same for the neighbors. It just takes a little time.