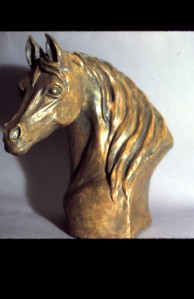 Today’s 145th running of the Belmont Stakes race in New York was exciting on more than one level. The Belmont is a 1 1/2 miles run and is the culmination of the Triple Crown Series which begins the first Saturday in May each year with the Kentucky Derby, and sandwiches the Preakness which was two weeks ago.

I never seem to get my bet down in time, but then I’ve only seen it on TV. We love horses in our family, but strangely enough, these are the only times of the year I watch the races. I study the racing form eagerly in the morning of the race for the odds and carefully choose my horse. The trainers are familiar, and some of the same jockeys remain from year to year. The pre-race is interesting to me because we get a little history of the jockeys, and of the trainers, which makes it fun to choose whom we will bet our two bucks on usually depending on the hardships the jockey or the trainer have gone through to get there.

Gary Stevens is a jockey I used to follow, mainly because he is so good looking (plus he’s a great rider) and he had a part in the movie “Seabiscuit” which I loved to pieces. He retired a few years ago and sat in the broadcasters booth to read the race, but I found him again at the Preakness when they announced that he was the “oldest jockey in the field” at age 50. I immediately chose him as fellow “codger” to put my money on to win, and he came in by several lengths on “Oxbow”, trained by D. Wayne Lukas who has been around nearly as long as I have. It goes to show you can’t discount the oldsters, we’ve still got it.

The second jockey they featured two weeks ago was Mike Smith, 47, and also called attention to his age, so I could have lived betting on either one, just on the face of their advanced age.

Today Gary Stevens was again on board “Oxbow”, and Mike Smith on “Palace Malice”. I naturally chose Stevens once again, and cheered like crazy during the couple of minutes the race takes. Charlie, our Jack Russell was tuckered out with the heat of the day and sleepily opened one eye in disgust. He is a lousy sports fan.

In a sport where sportsmanship doesn’t include making way for another jockey, Gary Stevens was a classic and classy gentleman at the end of this one. When Smith was asked what Stevens had said to him near the finish line when Smith was a little ahead of him, he said “Go ahead Big Boy, you’re movin’ better than I am.” I don’t know, that remark touched me more than if he had won the race.

“Palace Malice” took the race by a length. Dr. Advice lost one dollar on “Oxbow” who came in second I lost 2 dollars. Dr. Advice is almost as old as the two jockeys together.