Life is much different in the countryside. City and suburbanites usually know what to expect, good or bad. If the lights don’t work, one calls an electrician, plumbers are available to fix a leaky faucet, and if the neighbor’s fence falls into your geraniums, get a carpenter. The craftsmen who operate in the country may be out fishing or hunting, or merely lollygagging around, and will come when it suits them. In the meantime, phone calls are made at a pay phone, laundry is done at the launderette, and you gain an education in patience.

We were made aware of this phenomenon in the first week we took over ownership of the old farmhouse in Kirkland, Washington years ago. It sat amongst ancient trees within walking distance of Lake Washington, with no neighbors within shouting distance. There was a small orchard with pears, apples and cherries and a patch of large juicy raspberries ready to pick. Nearly were enough blackberries to keep the freezer filled with pies for those willing to pick them.

To say it needed some loving care and a good push into the twentieth century would be an understatement, but we were game and filled with the enthusiasm of stupidity. It sat alongside a shady lane at whose culmination were the two homes of an old Swedish man who adored us, and his daughter who seemed to wish we would move back to California. Mr. R. watched with interest while we labored day after day, lending us tools, giving advice and sharing rhubarb wine. He was a retired homebuilder who miraculously had built our small house for himself and his late wife, and was filled with stories of the families who had subsequently lived in it. We felt very fortunate.

We had managed to find a roofer, who was not only available immediately, but expected us to help him. It was apparent that “us” meant “me” as Dr. Advice set off for Alaska, Montana and points North, leaving me on the roof with an old gentleman in his 70’s to teach me where to place the shingles. At our first dinner party I had not planned ahead and neglected to take into account the small size of the dining area, so our next project was a new family room.

Looking back it seems as if we tackled all the projects at the same time, until I began to feel like the heroine of Betty MacDonald’s “The Egg and I”. I wrote page after page to family back home describing in detail each unfamiliar endeavor. I stopped holding the various craftsmen in awe as we learned each trade by virtue of do-it-yourself books.

The acre and a half we sat on began taking shape, with sprinkler systems, ornamentals such as rhododendron, azalea and camellias tucked in amongst the trees, and the whole enclosed by a circular driveway and white fencing.

It also became evident that we needed a large building to be used as entertainment, extra sleeping quarters for the many curious friends who thought we were out of our minds, and not least, studio space for my sculpture and teaching.

So with no prior experience and the grace God gives to idiots, we built a barn with sleeping loft ready to hold eight intrepid visitors willing to climb a ladder for access, which passed all inspections the City sent us, all within about 200 feet from the house.

Life was good until the neighbors horses got loose one night and discovered our new lawn. We woke that morning to find them munching happily on the ripe pears in the orchard, with broken sprinkler pipes poking up, and with no name tags on any of them.

During the five years we lived there, Dr. Advice spent two weeks of every month in Alaska and points north and east, giving me additional experience in ditch digging and containing the small creek which often overflowed, and the various projects of home repair. A whole new market opened up in the Seattle area for my work, and my North Coast education began in earnest. 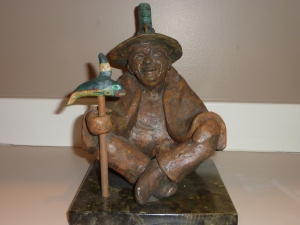 My work day in the barn usually began about four in the afternoon and lasted until midnight. I have always preferred working at night when things are quiet with no interruptions, the creative juices seems to flow more easily when alone with no thoughts but your own. The young today would say it’s “zoning out”.

One late night when sleep overtook me, I put away my tools, turned out the lights and locked the barn door, ready to walk back to the house in darkness like the 9th plague of Egypt. I remember the silence and the darkness with no moon. Suddenly I heard a very loud belch as from a nearby man. I ran the rest of the way to the safety of the house and of the two dogs whom I had neglected to take to the barn with me. Needless to say there was no sleep for me that night.

Early in the morning I took the dogs and went outside, where looking at the meadow behind the house I saw a small flock of sheep which had moved in during the night. Speaking with Mr. R. later in the day, I learned that these cute fuzzy creatures DO burp—rudely and loudly.

The lambing once over, the sheep moved out and several horses moved into the corral behind the barn, and in due time, we moved back home to California to a new grandson. 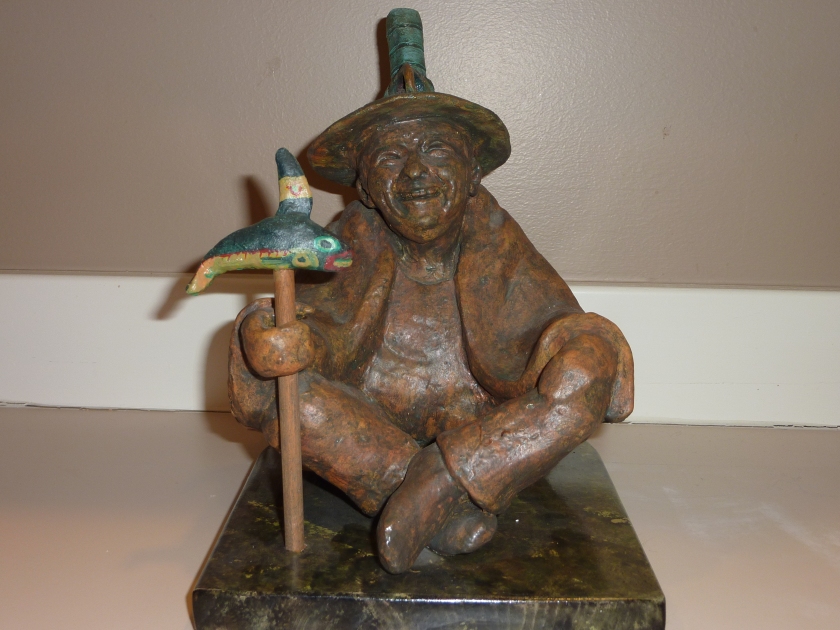 Shaman and Kushtaka! Both struck terror in the hearts of the Tlingit and Haida people, for both possessed frightening supernatural powers. The shaman, healer and seer, battled the kushtaka (Tlingit for Land Otter Man; in Haida, gageets) for the spirit of a man in danger of drowning or dying of exposure. Stories of kushtaka exploits, though they may no longer evoke the spine-tingling chill of earlier times, still have the power to mesmerize those who hear them.

The Tlingit and Haida universe abounded with spirits. In this world, the boundaries between animal and human realms were blurred. Early people could hear an omen in the hoot of an owl, or a chilling curfew in the croak of a raven. Should you hear the hoot of an owl, be prepared, it may be heralding very bad news if you are of the North Coast people!

The Chilcat blanket is quite an intricate robe, each family handing down the blanket from generation to generation.

The shaman mediated between the spirit world and the human realm. He was a figure of great power in most Native American cultures. Both the Southwest and North Coast people overflow with tales of the supernatural, so if you are feeling low, see your local Shaman! The cure may be worse that the cause, but it’s worth a try.