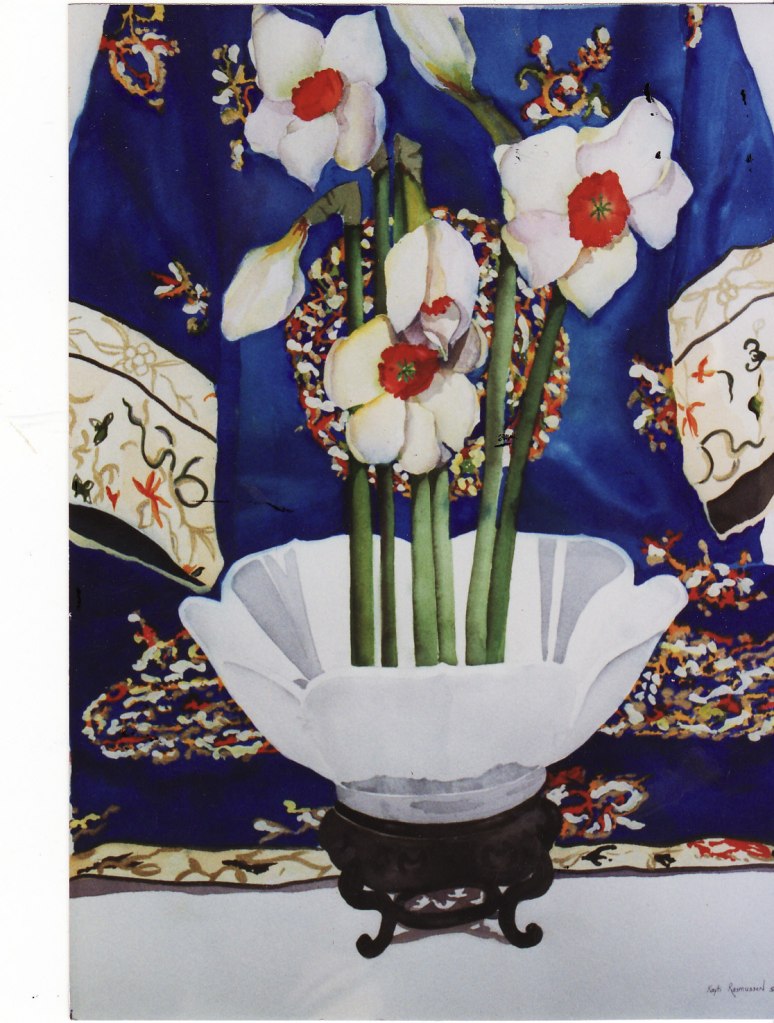 I don’t know why it is surprising to see sunshine–other than a few drops to wash off the dust yesterday, sunshine is a cash crop here in California. There is no negotiating with Nature. My motto, adopted from baseball player Ernie Banks, former shortstop for the Chicago Cubs is, “The whole theory of my life is sunshine, and today the sun is shining.”

The rain did bring these lovely narcissus though and they look nice showing off in front of the antique Chinese robe. I have a love of artistry and of things made by hand, and the robe is embroidered with thousands of tiny stitches said to have been made by blind nuns. I heard a phrase that Pope Francis said which seems appropriate: “There are some realities that you can only see through eyes that have been cleansed by tears.”

I don’t remember deciding to become a writer. You decide to become a dentist or a postman or woman. I always defined myself as a sculptor if I ever thought about it. I have a sign which says so, which hangs in my garage along with other things formerly important only in my imagination. In my chrysalis days in art shows and street fairs, it hung beside my table, directing potential customers.

As writers our eyes and ears are always open for snippets of something to expand upon. Today’s snippet came from my good friend Bill and it deals with the cleaning of an old oil painting.

Bill is a connoisseur of antiquities, and came by an old and dirty painting by way of a relative. I had restored a couple of old paintings for him some time ago, but he took it upon himself to do this one himself. He was chuckling while he told me that he was cleaning it with spit. This is a skill you may need to know some day and it will take awhile, but courtesy of Canadian Jaqueline Mabey this is how to do it:

As far as I know this only works on oil paintings, though possibly also on acrylic. “The chemicals in saliva are like the perfect gentle cleanser; they break down the dirt and dust that builds up on the surface without damaging the paint. You’ll need little sticks, a roll of sterilized cotton, and patience4. You can’t really rush the process. It will take the time it takes.

Wrap a small amount of cotton from the roll around the tip of the stick. Stick the cottony end of the stick in your mouth between your tongue and your cheek. Roll it around getting the cotton wet, but not saturated. Remove from mouth and slowly brush the surface of the painting. Make your way slowly across the work.”

Well there you have it. 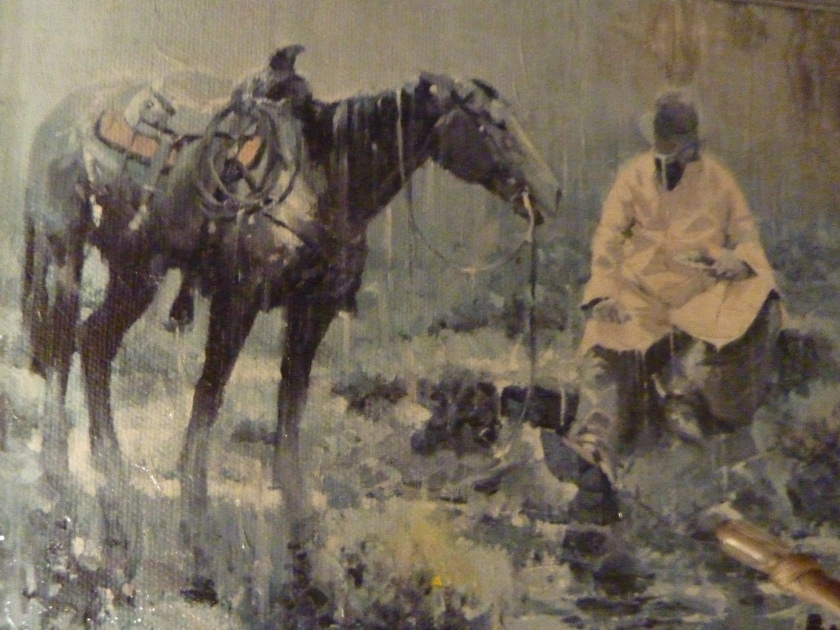 “Home On The Range” oil painting

The lure of the Old West remained strong through the 20th century for small boys strutting around in chaps and oversize cowboy hats. Annie Oakley made it possible for little girls to join in the games as well, reining in the spirited outlaws and slapping them into the make-believe jail until their mothers called them in to eat dinner.

Tom Mix, Gene Autry, Roy Rogers and Dale Evans, and all the other great cowboy stars of the silver screen in the 30’s and 40’s were roll models for these make-believe cowboys and girls. Saturday afternoon double feature movies were filled with kids dreaming of a Wild West they never knew. The horses played a big part in the Western fascination. Until Roy’s museum closed forever in Branson. MO in 2009, his great golden palomino Trigger, Dale’s horse Buttermilk, and their Wonder Dog Bullet, all products of the taxidermist’s art, were big attractions. 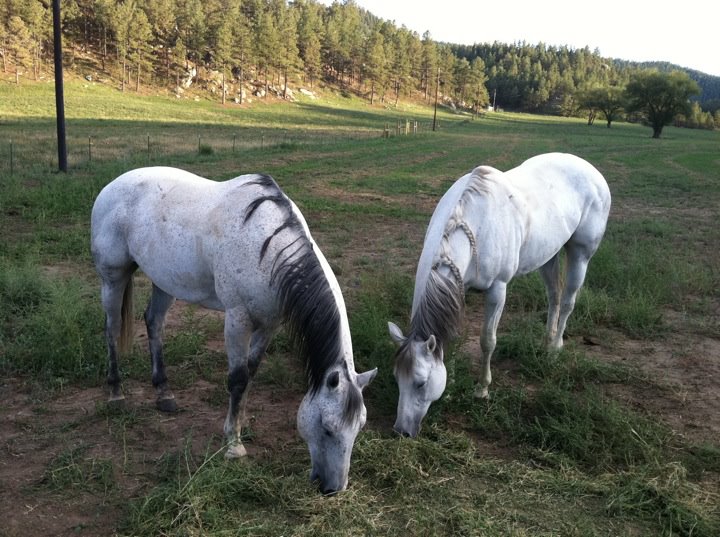 The TV Westerns otherwise known as horse operas of the 50’s and ’60’s were a phenomenon, with 26 Western shows playing in the same period. Tom Mix, Hopalong Cassiday, The Rifleman, The Lone Ranger and Tonto, the Cartwright family in Bonanza, Maverick starring James Garner, Gunsmoke, and who can forget Rawhide, with a young Clint Eastwood as Rowdy Gates? These are but a small number of shows still playing on the smaller channels.

Willie Nelson’s song “Mamas, Don’t Let Your Babies Grow Up To Be Cowboys,” about explains the life of a cowboy. “They’re never at home and they’re always alone”. They’re a different breed. They love animals, and a horse is part of their anatomy and their family. They don’t mind mucking out stables, shoeing, planting and baling hay, working in rain or hot sun, it’s all part of who he is.

I once told an teenage boy that no one could be a cowboy forever, but I was wrong. Sometimes the draw of the rodeo circuit and the love of what they do is worth the long hours, broken bones and time away from home. 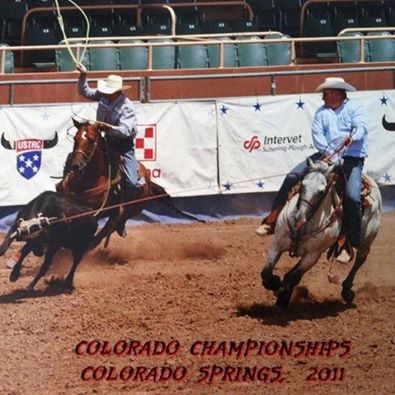 My eldest grandson on the right who proves that you CAN be a cowboy forever and also balance it with a successful business life during the week.

We all have a second life filled with things we love to do; perhaps it’s travel, ball games, camping, fishing, and golfing; it all sounds romantic. But some people want to be a cowboy. 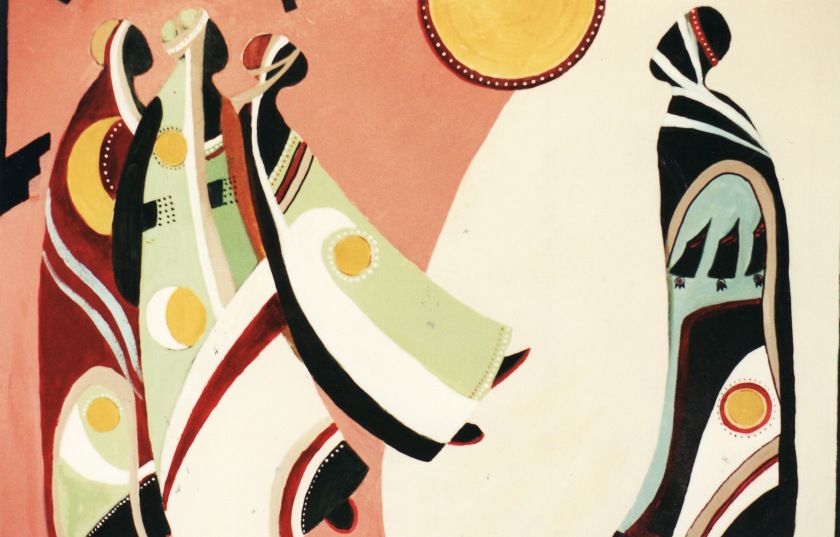 “People of the Sun” oil painting by kayti sweetland rasmussen

What is this painting asking us: Are we blind to Life’s possibilities? Are our lips sealed to prevent the dissemination of heretic thought?

The rising sun is obviously our touchstone, without which we would forever wander in the terrors of darkness.

Now put this in the context of today’s life.

Do we stumble through life without taking every advantage offered us in the way of work, play and love?

Are we quiet in the face of dissention? Do we keep our opinions to ourselves for fear of disagreement?

Possibly the painting is saying “The darkness is over, it is a new dawn, and you can escape fears of the night.

Meditation doesn’t have to involve sitting cross-legged on the floor trying to clear your mind. The pleasure of losing oneself in something beautiful or meaningful such as art or music answer this need abundantly.

Elizabeth Gilbert’s memoir, “Eat, Pray, Love” tells about her four month visit to Italy where she grew several sizes larger, while exploring the joys of spaghetti in all its meltingly delicious forms. The next four months were spent in India learning to meditate while sitting in a dark cave clearing her mind. I prefer to look at something beautiful or thought-provoking. 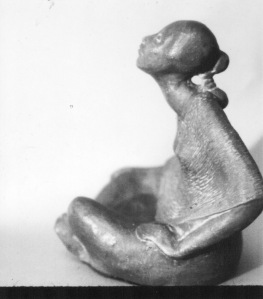 This quiet bronze is very peaceful to me. It invites stroking, and it encourages me to close my eyes and breathe deeply, much as one would while in the practice of yoga.

This large oil painting hangs in my friend’s home and I would go to her home just to stand and study the painting. It is by her son, Brad Young, and I don’t know the title, or even if it has a title, but it is thought-provoking. I’m sure everyone sees a different image from mine, and I too, can see something different each time I see it. When I photographed it, I was able to turn the image into various directions, and found that it was intriguing, however it was viewed.

This is what art should be; a visual feast to enjoy forever. Something to give balance to our lives.

I love the watercolor medium.  The look of color flowing over damp pristine white paper to become another color as it blends with a neighboring hue is so exciting to me.  Oil painting of course has its own virtues, but to watch one color flowing into a shadow on the paper and bringing a sort of mystery to a dark fold in a garment, or the bark of a tree, is a delight which can never be repeated.  That is what makes watercolor by far the most difficult of the paint mediums.  It cannot be copied, nor can that particular flow happen again.  It has a sensual quality to it.

Great oil paintings command great price.  Far more than a watercolor, as they should.  The simple watercolor never claims to be great art.  But the sometimes astonishing movement of colors mixing on the paper makes it all worthwhile.   Just go with the flow.

It’s a good motto for life too.  Rivers flow, and if there are no reasons to divert them, then let them flow.  They know where they’re going.   There are a lot of occasions when the best path is to do nothing.  In the sixty’s someone came up with a great catch phrase:  “Don’t sweat the small stuff; and it’s all small stuff.”

So when you find your knickers getting into a twist over nothing, just go with the flow.