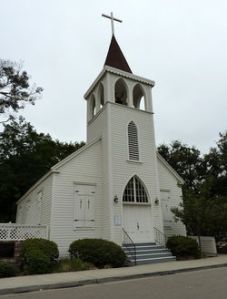 As funerals go, it was a 3.8. Yes, I believe in awarding credit to a good funeral when it is deserved. Nearly everybody has one at some time or other, so it is important to do it right. My husband’s cousin, Louise Ann, lived for some time in Kansas City, but when the time was right, she moved back home. She didn’t want a large monument like some of the others in our large family plot, so she brought a large stone she found somewhere to serve the purpose. It was unique, and since she was a rather well-known artist/interior designer, quite fitting.

Some of my husband’s late relatives are living out eternity in the old Pioneer Heritage Cemetery in Dublin, Ca., which has as its cornerstone the Old St. Raymond’s Catholic church, the oldest Catholic church in Alameda and Contra Costa Counties. Built in 1859 by some of the original pioneers in the Valley, and while no longer used for general services, it is occasionally used for a funeral of a pioneer descendent. The cemetery itself, and the small museum beside it, relate the history of the area, as does signage at the head of some of the family plots, telling the individual history of that family.
the museum was originally the tiny schoolhouse, and my father-in-law and his ten brothers and sisters began their academic studies in it.

The Valley was settled by both Irish and Scandinavian immigrants, many, including our family, still living in the vicinity.
Small, but charming, it is exactly the place Louise Ann would choose for her final departure. The creaky little building was filled with long-lost cousins, a few friends, family and ex-husbands. There were three of the latter, but the second one chose not to make an apprearance, and I don’t remember him anyway. The first one was the father of her three children, but the temperature had become so heated at the end, she decided to change all of her three children’s surnames to her own maiden name.

One daughter, who had been estranged from Louise for some time, did not come to say farewell, however her husband, who had always had a prickly hedgehog relationship with Louise, came, stood and spoke a few words in her favor. His memorable description of her was that “Louise never saw anything or anyone she felt she couldn’t make better.” The last ex-husband agreed with that statement, and it is likely that that was the reason he became an “ex-husband.” The daughter who planned the occasion per Louises’s instructions, had placed a large photo of her mother at the front of the church, beside a collection of small sheep sculptures to which we were invited to help ourselves. She said she had never been able to convince her mother to stop wearing bright red lipstick, as it did not become ladies beyond a certain age. I doubt that Louise cared very much what anybody thought.

There was no minister, no service beyond the exchanging of memories, and all in all, it was a happy, friendly atmosphere. Unobserved by most of us, a small New Orleans jazz band dressed in appropriate white uniforms and hats, struck up the first notes of “When The Saints Come Marching In”. It was a delightful and surprising ending, and we all marched out behind them as we wound our way through the cemetery to the burial site, coffee cups or wine glasses in hand, and some singing the words to the music on the way.

Her Kansas City rock had been placed, a few flowers scattered, and we said a fond farewell to an indomitable lady who never cared if anybody liked her red lipstick, or anything else. I liked her style.