We had lunch with Dale Chihuly several years ago in a small crowded Seattle restaurant while on a visit to see his show at the Seattle Museum. Of course he was hunched over his plate at an adjoining table and paid little or no attention to us, but nevertheless, we had lunch with him. He may look like a pirate with his patch over his eye and wild shock of hair, but he has been tapped with the wand of genius when it comes to making glass.

Beginning with the Egyptians and the Greeks who discovered that sand and quartz could be melted into glass it took the Romans to improve upon it by adding a fertilizer called natron as a flux so they could melt the stuff at a much lower temperature. They could make a lot of it in bulk and then ship it all over the Roman Empire to local craftsmen who turned it into cheap functional items. 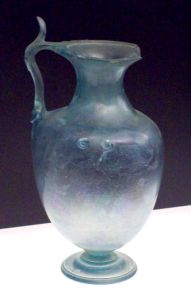 The Roman love of glass led to the invention of transparent glass windows. Before the Romans, windows were open to the wind, and anything else which might fly in. The windows were small and fused together with lead, because they didn’t have the technology to make large panes of glass, but they started our obsession with architectural uses for glass.

Until the development of transparent glass, mirrors were simply metal surfaces polished to a high shine. The Romans realized that the addition of a layer of transparent glass would protect this metal from scratches and corrosion, and allow them to reduce the thickness of the metal.

Scroll ahead a couple millennia, and glass sculptor Dale Chihuly comes along to enchant us with his brilliant and mysterious glass sculptures and installations. He is unique to the field and seems to be able to breathe life into blown glass.

I became aware of Chihuly while living in Seattle when he formed his Pilchuck Glass School. The 1970’s were a particularly vibrant time in the art world, both in Seattle, Portland and the Bay Area. It was exciting to be a miniscule part of it, if only on the fringe. Our friend Marvin Oliver, son of good friends, got his masters in Fine Arts at the University of Washington, and subsequently became a professor of Art there. Marvin was my conduit to what was “happening” in Seattle at that time, and he knew that Dale Chihuly was doing some extraordinary work in a boathouse on Lake Union.

The glass bug had bitten numerous people, and small glass blowing studios popped up in various places all over town. One such was in the basement of an old building in Pioneer Square just outside the restrooms. It always took awhile to get back upstairs when they were working, it was so fascinating to see the large blobs of molten glass slide up the blow pipe and turn into something wonderful. You always wanted to stay and finish the process. Now there is a large glass museum in Tacoma, featuring glass from artists all over the world. A very large studio is open and invites the public to simply sit and enjoy the magic.

The sheer scale of Chihuly pieces can leave you breathless in amazement, and the color may well remain reflected in your retina for days, but the memory of a visit to a Chihuly show will remain with you forever. The mass of color above is from his “Persian Series” and was installed in the ceiling of a doorway at the Seattle Museum. Throwing all manner of indiscretion aside, I lay on the floor beneath this legerdemain and became a devoted admirer of Dale Chihuly.