“The Mermaid” Painting by Audrey Mabee

“People sometimes try to convince me that I am drowning.

If that’s true I can breathe underwater.

But I can’t just swim away like a mermaid.

And sometimes I do struggle,

But most of the time my eyes secure themselves

with a deadened glaze and rest in the dankness of my brain.

I know there is no life guard on duty, but if you want to

swim in the moonlight there usually isn’t.

If I go under, the water’s cool, cushiony embrace

Will envelop my tired body and lay me on the

POEM BY KATE NICKERSON, when in high school

It had been a long time since I had picked Oregon blackberries. Getting tangled in the thorny bushes and scratches on your arms and avoiding hungry bees is part of the fun of trying to fill a pail with the biggest juiciest berries you can get at. It was early in the summer, but the weather was warm, and my mother and I had decided that a blackberry pie would taste pretty good with dinner if we could find enough.

In long-ago years, during the War, I had walked along these back roads alone, picking and eating and not realizing at the time what a gift Mother Nature had given us. In those days I knew all the hidden places berries could be found, but it had been a long time, and now on this return visit, I saw that my mother had discovered new places.

I don’t remember how many berries we picked that day, or if there ever was a berry pie made that night, but sitting in that pasture with my mother, with an errant butterfly hopping a ride on a summer wildflower, and watching a mashed potato cloud passing overhead now and then, made me tell her, “You know, I feel as if I’ve come home again.”

The first ever backpacking trip for the seven year old grandson took months of planning. It’s like waiting for Christmas—it takes more than twelve months to get there, and childhood excitement grows until it explodes. The fear factor sets in as departure time gets closer. As they watch the backpacking gear stack up in readiness, they begin to doubt their readiness for this great adventure. Their nine year old brother had made his mark in the wilderness two years before and offered great encouragement as the time approached.
Seven seems to be an appropriate age to expose a rambunctious boy to the wilderness, and the Forest Service insists upon that age before they give a permit. The have enough discipline to listen to wise old grandmothers, and enough fear of the unknown to look before they leap. Or maybe it’s the other way around.

We were hiking at 10,000 feet in the Sierras where the sun never gets around to melting the snow pack even by August. It’s pretty cold at night, and a cozy sleeping bag sometimes isn’t as cozy as you might like. The chipmunks are very busy night and day getting ready for a really cold winter, so the nighttime traffic over sleeping bodies, including exposed faces, is a real “treat”.
Mealtime is always a contest to see if you will get breakfast or they will.

It was an eventful beginning. After a short walk from the trailhead, we took a boat to the actual trail. My husband and I had hiked often in this area, and felt it was a safe enough beginning introduction to the pleasure of the outdoors. We each took a boy, and I was in charge of the smaller one when we took off. We immediately ran into a lot of snow, and I had to be the one to “take a short cut” and get two of us lost!

Mountain trails lose their familiarity when covered with snow no matter how often you take them. This should be printed in very large red letters on all maps, and pasted across all foreheads before embarking.

We remained lost all day while a formerly smug granny consoled a frightened 7 year old boy. But all was well when Dr. Advice showed up and offered a ton of unwelcome and humiliating advice, and we settled down for the first night in the wilds of California.

We had hit a great time to have it all to ourselves, as we encountered very few hikers, and the more elevation we gained there were no others. When we got to the top of the mountain, the sign identified our location as “Dick’s Peak, 9,700 feet”. There are lots of small beautiful and icy cold lakes scattered throughout the Sierras, seducing sweaty hikers to cool off in their pristine depths.
“But I didn’t bring my swimming suit”! both boys cried after I sensibly suggested a swim. “Who cares”, responded Dr. Advice, divesting himself of his clothing. “There is absolutely no one here to see you”, I told them, after they fiollowed suit. 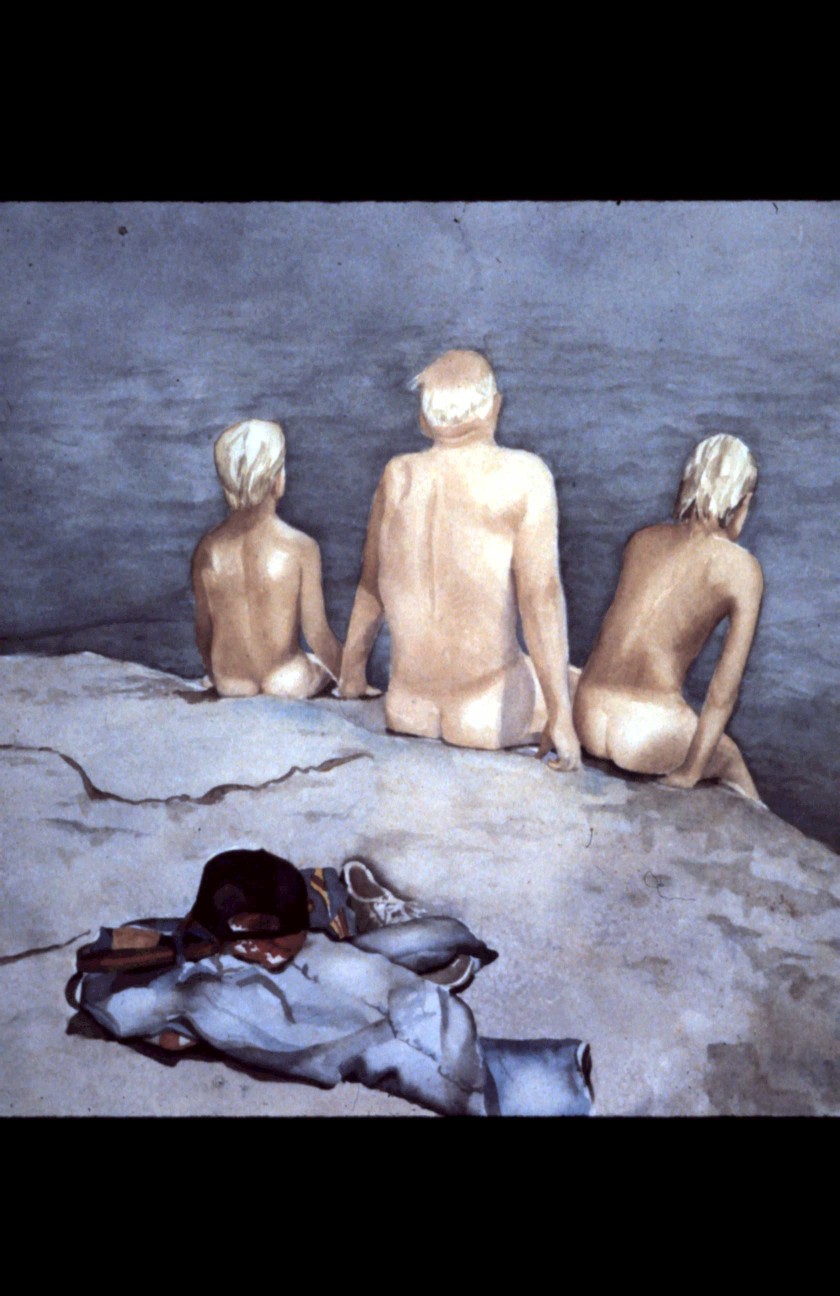 So now they are captured forever in paint, contemplating the beauties of the wilderness, sans clothing.

Both boys are now grown with families of their own. Both are still interested in the outdoors, and the younger one is a wildlife biologist.