Having been born and raised in a large southern California city, I had no opportunity to meet any sheep face to face.  I saw  them while on road trips, when they were lazily grazing in a field, but we were never formally introduced

In the Southwest, where the raising of sheep is a big part of the Navajo economy, sheep are guarded like children.  They give so much and receive so little from the arid land.  I came upon this peaceful scene with grazing sheep and their young shepherd early one summer evening.   Their wool coats are so lush it makes you want to hug them.  It may have been time for a haircut!

The sheep at the left are residents of Grasmere in the Lake Country of England.  Their restaurant opportunities are somewhat different, but the outerwear is no better than their uncomplaining relatives in Navajoland.   Of course, the meat may be a bit more tender.

For awhile I seemed to collect sheep things wherever I went, and then I found two friends who loved them too, so gradually I have parted with a few for the sake of friendship.  In Cornish country I saw a great painting of sleepy grazing sheep in a local gallery which now hangs in my dining room .  My friend Kay likes it, but I’m not selling it to her!  She’s from Idaho, and they have a lot of sheep of  their own there.  We went to a cousin’s funeral and she collected small sheep figures which her daughter offered to anyone who wanted a memento.  I took one and think of her when I see it sitting in my studio.  Maybe Kay will take my sheep painting one day at my funeral!

We stayed in an old castle in Wales one year.  Exploring around the gardens, I came to a stile at the side of a pasture which I climbed over and it took me into a wonderful area which seemed to hold the ruins of a mini-Stonehenge.  Large tumbled rocks formed convenient jumping-off places for a small flock of snowy sheep to play on.  It formed one of those “memorable moments” I’m always talking about!  I spent the rest of the afternoon getting acquainted with these little guys and photographing them.  Have you ever just sat and watched them play?  They paid no attention  to me as I snapped photo after photo and laughed at their antics. 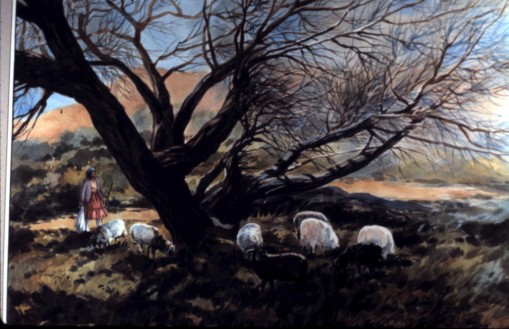 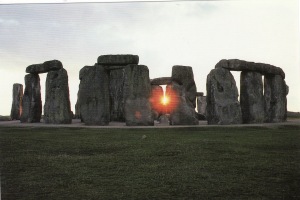 Seeing the setting sun peeking through the ancient stones of Stonehenge is reminiscent of the equally old stone formations in Canyon de Chelly, Arizona.  Rather mindboggling when you think tht ancient man was in the same time warp at the same time.  What is it they were trying to do?  Determine the time of day, month, year?  Something far different?  One of life’s mysteries.  And I also wonder if there were sheep grazing somewhere in that dry, hot country.