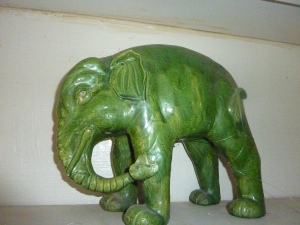 We came into possession of this antique green ceramic elephant about fifty years ago when I discovered it hidden and covered with the dust of ages in the recesses of an unlikely antique shop here in our town. I wet my finger and drew a line down its back to better see the glaze, and realized it was a treasure indeed, so I bargained with the proprietor, and claimed it as my own.

Shortly thereafter we moved from California to Seattle, Washington, and settled in a picturesque old red and white farmhouse in the little town of Kirkland by Lake Washington. The old green elephant made himself at home on a bookshelf in the living room beside other old decorative items, and we thought no more about it while we remodeled and added onto the old house.

The house had seemed so charming to us when we first saw it in January, but by June, when we finally made our move, we drove right past it. In the preceding six months and the nearly constant nourishing winter rains, the weeds and grass had grown tall, and the wild blackberries so large and tangled it was nearly unrecognizable. A white rail fence surrounded it and continued down the lane which went along one side of the property. The weight of a fallen branch had obliterated a couple of rails, and remained in the weeds beside it.

The upside of it was that the fruit trees and berry bushes were loaded with cherries, pears and raspberries, there were horses in the field behind which we could enjoy watching but did not have to feed, and best of all—there were no neighbors! At least we thought the lack of neighbors a good thing, until we found there was no one with the necessary information about people to help with the work, or even how to find a public telephone to call someone until we had our own phone hooked up. This was long before someone thought of inventing cell phones!

With very little room for guests, we took on the job of building a barn for entertainment and my studio. It had a game table, TV, comfortable chairs and beside the necessary furnace, an antique Civil War pot-bellied stove for heat AND ambiance. It had a sleeping loft above which would hold eight brave people agile enough to climb the ladder to access it.

We knew how important this additional building was as I had learned my lesson early when I invited a number of people from my husband’s office for dinner and suddenly realized I had no place to seat them! I had left my large dining room furniture with a friend until my daughter was married and ready to take it. Instead, I had brought my kitchen table, a venerable square and heavy oak piece which had seen many years of hard usage, but which at most might seat six individuals if they were of normal size. Through the graciousness of our guests, we survived the evening, but realized we needed more room, sooner rather than later.

Among the first guests who came, were three gentlemen from Juneau, Alaska, with whom my husband did business, one of whom took an interest in the old green elephant on the bookshelf beside the fireplace, and asked where I had got it. I related what I had learned of its history which was that it had been purchased in China many years before by the niece of an elderly woman friend of mine in our small town in California. The woman, Laura Thane Whipple, had moved with her husband to Alaska in the early part of the century, to join her brother, Bart Thane in the mining business. Mrs. Whipple’s unmarried niece went with the family, and they settled near Juneau, in an area subsequently named “Thane” for their family, and where she started a school, which taught elementary grades. The young teacher had told stories to her class of her time in China, and shared her mementoes, among which was the elephant. Surprisingly our guests had all been students in her class! Also surprisingly, two of them remembered seeing the green elephant.

They told us that the settlement of “Thane” had actually become Juneau, which was now the capitol of Alaska! So our old green elephant has the distinction of being one of the first residents of Juneau, Alaska!

16 thoughts on “GREEN ELEPHANTS IN ALASKA”