Women painters were not always granted friendly acceptance by the male artistic community. In fact their efforts were often viewed as a curiosity. Artemisia Gemtileschi was a 15th century woman painter best known for her specialty of painting strong and suffering women. As it turned out, she had a good reason for doing so.

Born in Rome in 1593, she learned to paint alongside her father Orazio Gentileschi who tutored her and recognized her genius. When she showed promise at the age of 17, he engaged another painter, Agostino Tassi, to tutor her privately. Handsome and charismatic, Tassi was interested in more than teaching Artimesia to better her painting skills, and after much harassment by him and by other artists in his studio, Tassi raped her. As she was a virginal teenager, this enraged her father on many levels, as her reputation was ruined and she was no longer considered marriageable.

Artimesia’s mother had died when she was 12 and she had no female influence in her life. Her father rented an upstairs apartment to a woman tenant, Tuzia. Though Artimesia befriended Tuzia, on the day of the rape when she screamed for help, Tuzia ignored her cries. Later Artimesia’s work contained a strong sense of solidarity and unity between women, something that Artimesia had not found in real life, but showed a great longing for this kind of relationship. 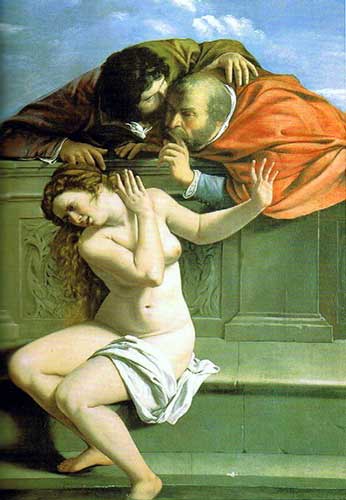 “Judith and The Elders” This painting may have been done before the rape during the period she was being sexually harrassed by Tassi and his friends.

After the rape, Tassi promised to marry her, but reneged on his promise, and was brought to trial by Artimesia’s angry father. During the ensuing seven month trial, it was discovered that Tassi was planning to murder his wife, whom he had acquired by rape, and had an adulterous relationship with his sister-in-law. He also had plans to steal some paintings from Orazio’s home.

A transcript of the infamous seven month court trial still exists, showing that Tassi was found guilty and was given the choice of five years hard labor or exile from Rome. He chose the latter, but he was back in Rome within four months, probably due to influence in high places. The trial influenced the feminist view of Artemisia Gentileschi during the late twentieth century, and she was rediscovered by modern feminists. She painted many pictures of strong and suffering women from myth and the Bible, and made it her speciality to paint the Judith story. Judith Beheading Holofernes showing the decapitation of Holofernes, shows very well her feeling toward her rapist.
She was criticized for painting bloody and sadistic paintings, notwithstanding her opportunity to show the unfairness of men toward her victimization. Her rebellion was duly noted and condemned.

That she was a woman painting in the fifteenth century and that she was raped and then participated in prosecuting the rapist, long overshadowed her achievements as an artist. Notwithstanding, today she is regarded as one of the most progressive artists of her generation.

“Judith Beheadidng Holofernes” The painting displays a strong sense of solidarity between women.

A month after he trial, Orazio arranged for a marriage for his daughter to Pierantonio Stiattesi, an uninspired artist from Florence, who it turned out was more interested in gambling than in painting. They returned to Rome ten years after the court case had mostly been forgotten by the general public. It was never forgotten by Artimesia.

There are many great women artists I grant you, but why are there not more of them represented on the walls of our museums? Being an artist and having had a lifetime of being female, I have given this a lot of thought.

Being an artist is a career choice which takes a tremendous amount of time and energy. This is after a woman overcomes the male perception of the traditional role of women, which is as the guardian of hearth and home. At first women artists kept busy making needlepoint flowers, weaving, china painting, etc. These things made the house look better, so they were OK occupations.

The fact is also that the raising of children takes a tremendous amount of time and energy and doesn’t leave a ton of free time during which the brain is bursting with creativity. Women are also good at nurturing their husbands, making it possible for him to concentrate on art or whatever his profession may be.

Michelangelo had somebody to cook his meals, Rubens”wives darned his stockings so that he looked good while getting all those commissions. Gauguin had females taking care of his every need. And we know all about that. He left his wife and family and lounged around in the South Sea sunshine. Even Van Gogh was jealous of that.

It’s a matter of choices. A female artist can take care of other people or concentrate on art. It’s impossible to do both and reach the comparative level of famous male artists.

As far as “serious” art was concerned, it involved perhaps painting nudity, which of course was totally unsuitable. An artist, male or female, was considered a bit eccentric, and some people are uncomfortable with that.

Nevertheless, we are grateful for the women who persevered and have given us the privilege of sharing in their dreams

17 thoughts on “PUTTING LIGHT INTO THE DARK SPACES”