It is hard to recapture feelings which you had 70 years ago. The events of our lives spring up in chapters, but how we actually “felt” at that time escapes us.

No one changes their mind more frequently than a teenage girl, and when it comes to boyfriends just when you’re in, you’re out. That’s the way it happened to me the summer of 1944. The new one had a classy little 1936 blue Ford coupe with spotlights and pipes, the old one had a horse. I couldn’t wait to have it parked in front of my house. The occupant also had a blue and gold block sweater to go with it, signature of a high school VIP.

Sam Rasmussen, second from left. Owner of the blue Ford

In spite of having a steady boyfriend, life went on in my life as a senior at Alameda High. As a result of our being caught drinking in the local movie theater, my friend Nancy Cranmer’s parents shipped her off to Westlake School for Girls in Hollywood, where Shirley Temple was going. My Aunt Connie ( Corinne) campaigned for me to go as well, taking me away from any bad influence I might have in Alameda. My Grandma’s dream of me being a second Shirley Temple when I was a child would mean I would at least be a classmate. Where they planned to get the money was a mute point.

I liked Nancy a lot; her nickname was Flea for some reason, and she was in my wedding later on. We discovered that we had a similar event in our family history in that an ancestor was burned at the stake in England. Her ancestor was Thomas Cranmer, Archbishop of Canterbury, and mine was Bishop Nicholas Ridley; Bishop Hugh Latimer joined them in the event. A lovely memorial of the three martyrs stands at Oxford, England, as a grim reminder of Bloody Mary’s power.

Meanwhile, the boy with the blue Ford took over my summer, and I found a steady boyfriend in Sam Rasmussen.

The draft hung like a specter over all our boys, and Sam enlisted in the Merchant Marine Cadet Corps whose training camp was nearby in San Mateo. I had two or three spiffy evening dresses to wear to the weekend dances. Someone had left these lovely dresses on one of the Matson ships, and by virtue of Uncle Fred, I inherited them. There was often something left in a cabin after the ship hit port, with no forwarding address.

All in all, I did OK from things rich passengers left on board as they departed. Great Uncle Fred was an executive in the company, and Dad’s cousin was Captain of one of the ships. That’s also how I got my first camera, a fancy Leica.

Graduation came for me and it was bittersweet. Sam would be graduating as well and shipping out. The night of my graduation I looked for Sam, but he hadn’t come for some reason. The reason came clear soon enough when I found I had been “dumped”. 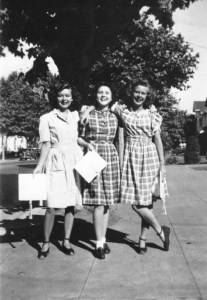 I spent the rest of the summer on the beach at Cottage Baths in Alameda, feeling sorry for myself, though my mother was understanding about the breakup of my “big romance”, since I was only 17, she and my father, still overseas, felt better than I did about the whole thing.

My next move was the same as most graduates; get a job or go to college. I decided to get a job first and think about the rest of my life later.